As written in Thursday’s journal, I noted we were staying in the basement of Beautiful Savior Lutheran Church in Winnipeg. Dave made breakfast for us as we packed up and got ready to head out. We had a detour to a walk in clinic. Leon had a minor health concern, so wanted to have it checked before heading out for 10 days where a doctor is usually not available. We then headed to the airport to get all of our bags and boxes checked in. With all the Bibles and books we brought along, we had over 200 lbs. extra. With the plane not being full, all of our cargo made it on the plane instead of having to come to Shamattawa on the next flight. While at the airport, we met a large team from Wisconsin and some from Texas that were flying out to Garden Hill. Had a nice visit with them before we got on the plane. Ok, now it’s time to board. We got on the plane, it taxis out to the runway, for about 10 minutes, then back to the terminal. We were asked to get off the plane because it was delayed for an hour or so. They need our plane to detour up to Thompson to deliver a part for another aircraft in Thompson. So back on the plane and off to Thompson. We had just a short stop there, then finally we are headed to Shamattawa. Shamattawa is about 50 min. flight from Thompson. As I type this it is now 4:20 PM, and we are still up in the air, so without out the side trip, we could have been in Shamattawa already for a couple hours.

Well, we landed in Shamattawa, guess what? One of the first words out a lady’s mouth was “you know, the community has no water yet. Been out for second day now”. So here we go again, always be flexible right. We will deal with that later. Dave called Roy Miles our contact for a ride to the teacherage which were our housing for the week. Roy came to get us and all our bags and boxes of Bibles etc. Took us to the Northern store for food for the next day or two. We got our place to stay, dumped off our bags, then off with a bunch of empty water jugs to fill them up at a flowing spring a couple miles out. We did get about 20 gallons of water for flushing and boiling for dishwater etc.

We went over some of the music and video for the upcoming day’s lessons before closing down for the night. Think we are all very ready to turn in for the night. The water did come on again, so we are greatful for those in the community who have made the repairs. Thank You Lord!

We always know that things will change as they have today. Our plan is not God’s plan! 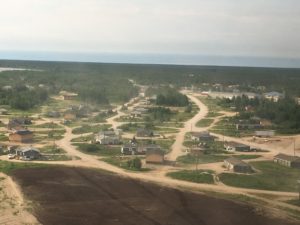 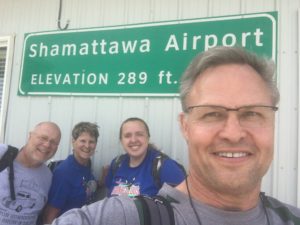 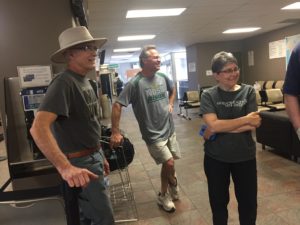